Here's something different for you and most likely something you have never head of before. When people come up to me and say "Hey, F-Zero / Wipeout / Some other sci-fi racing game is super fast" (a surprisingly uncommon occurrence if I do say so myself) I say "clearly you haven't seen Ballistics!" 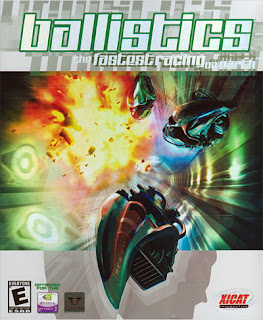 It is at this point I receive a blank stare, to which I respond with:
"Read my blog, I will tell you all about it!"

I will have to start off this post by pointing out there is a good reason that most people haven't heard of Ballistics; it isn't a particularly great game. However the sense of speed that this game manages to achieve is completely unmatched in the world of gaming. Take a look at this video to see what I mean:

As you can see the game is a sci-fi racing game where the races are set in a series of tubes. Your vehicle is attached to the inside of the tube and the main form of control is to rotate around the track. The actual game ends up being pretty much entirely an exercise of memorisation, as there is no way to tell what is coming when travelling at speed without crashing into it and exploding. There is little interaction with other racers, so the game ends up feeling more like a super hi-speed time trial more than anything.

There are added complications in that you have to manage your heat and most of the speed comes from picking up booster energy which is scattered around the track. Heat is generated during collisions and the temperature goes too high your bike will explode taking you out of the race. However on harder difficulty settings and when travelling at any sort of speed, a lot of collisions will take you out instantly.

The brilliance of the game is that it gives such an incredible sense of speed and is full of neat little touches such having the player's display in Mach as well as MPH. For added effect, upon hitting Mach 1, almost all audio is suddenly eradicated as you break the sound barrier.

There isn't really a huge amount to say about this game, other than I kind of love it just for the fact it does speed so damn well. I can totally appreciate a game which just does one thing and gets it spot on, even though that one thing makes the game mostly unplayable. If the developers made this game slower, it would probably be a much better game and much more playable, but it would also be a far less interesting title.

I would love to see a new modern take on this, could be a very neat little XBLA game or maybe even a 3DS version. I could see this in 3D giving people some wonderful headaches. Seems unlikely to happen though as the original developers, GRIN, have been defunct since 2009. One of these days I will write about a game where the developers are still alive and kicking...
Posted by Simon Davies at 23:30